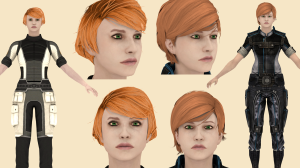 As mentioned in previous post, here comes a new release of Mass Effect NPC characters morphs : everyone’s favorite yeoman, aka Kelly Chambers! She comes in ME2 and ME3 version (ME2 on left, ME3 on the right in picture), though in her ME3 version, she wears Alliance outfit because I just can’t stand her ME3 outfit… :

File is a zipped blend file.

To use, unzip first, then open in blender. ME2 version is on layer 1 and ME3 version on layer 3. Both come with basic shaders.

I swear, one of these times, you’re gonna wake up in a coma — Cordelia, Buffy