As a follow up of my previous post where I talked about an addon to import mass effect headmorph to blender, hereafter, you can find some examples of use with some of my own Shepards. You’ll find a mix of BroShep, FemShep, ME2 and ME3.

Please note that the blender ‘renders’ were done with Cycles and can hardly be called renders : most of the time, lighting is just default ambiant occlusion and textures are just at the beginning of the work.

In this example, ME3 mesh and headmorph were used.

In the background : it’s a caps of 3 views of Shepard in blender, taken with the  Cycles interactive 3d view.

Above, we have a caps from ME2 at the top, another ME2 one on the bottom left and a ME3 one at the bottom right.

Here, we have a femShep from Me2, then mesh and headmorph were exported from ME2.

In the backgroung, another caps of 3 views of Shepard in blender, it’s cycles 3d interactive view with just some ambiant occlusion and little work on textures.

Above, we have 3 caps from ME2 and different angles. 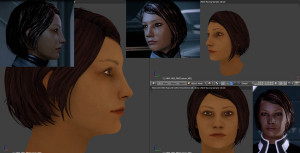